Fibroblast growth factor receptor (FGFR) aberrations have been identified in various types of cancer. Squamous cell carcinomas of the lung and head and neck have been shown to harbor these genetic alterations in high frequencies. A number of agents that target the FGFR signaling pathway are currently in development in various tumor types. This review will summarize the potential roles of FGFR in lung and head and neck cancers, as well as discuss the current landscape of therapies in development that target the FGFR pathway by summarizing the clinical trials of FGFR inhibitors.
Key words: FGFR; lung cancer; head and neck cancer; therapeutic target; clinical trial

The fibroblast growth factor/fibroblast growth factor receptor (FGF/FGFR) signaling pathway fundamentally regulates embryogenesis, adult tissue homeostasis, angiogenesis and wound repair.1,2 It also plays important roles in cell functions, including proliferation, differentiation, apoptosis and migration.3-5 Deregulated FGF/FGFR activations have been associated with a broad range of developmental disorders and cancer progression. Upon ligand binding, FGFRs activate a cascade of downstream signaling pathways, such as the mitogen activated protein kinase (MAPK), signal transducer and activator of transcription (STAT), the phosphoinositide-3-kinase (PI3K)/Akt pathways, and DAG-PKC, and IP3-Ca2+ releasing signaling branches via phospholipase Cγ (PLCγ) activation6-9 (Figure 1). The alternatively spliced FGFR isoforms have been shown to result in oncogenic FGFR signaling, which promotes tumorigenesis. In this review, we will focus on the FGFR aberrations in lung and head and neck cancer, and compare them with other tumor types, such as bladder and gastric cancer. We will also discuss the current clinical trials of FGFR inhibitors that include lung and head and neck cancers. 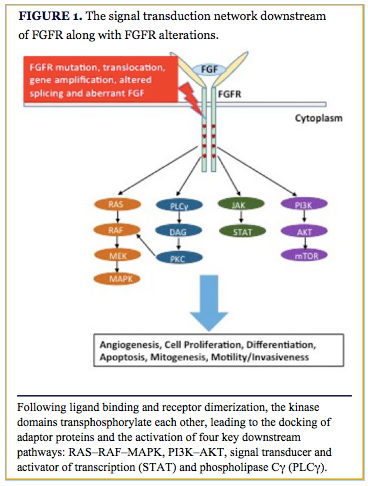 FGFR1 has been shown to be amplified in 10%–20% of squamous non-small-cell lung cancers (SqNSCLC).10-12 Preclinical studies have demonstrated that FGFR1 amplification confers FGFR signaling dependence.10 Treatment of FGFR1-amplified SqNSCLC cell lines with selective FGFR inhibitor PD173074 resulted in cancer cell growth inhibition and apoptosis. In addition to squamous cell, small–cell lung cancer (SCLC) cell lines, as well as xenograft models derived from both cell lines and patient tumors treated with PD173074 have also shown tumor regression with PD173074 treatment through inhibition of both FGFR 1 and 2.10,13 Activating FGFR2 mutations occurred in 5% of SqNSCLC14, and 2.2% in non-small cell lung cancers (NSCLC).15 In vivo NSCLC mice model with an FGFR2-mutated tumors were sensitive to a Pan-FGFR inhibitor.16 In addition, increased FGFR3 cDNA expression was found in lung cancer tissues17 from patients who progressed on prior chemotherapy treatments. Novel FGFR3 fusion genes were also identified in SqNSCLC18. More recently, it has been discovered that de-repression of FGFR2 and FGFR3 can cause rapid acquired resistance to EGFR tyrosine kinase inhibitors among NSCLC cell lines.19 These recent findings have suggested a clear role of various FGFRs in lung cancer (henceforth referred to NSCLC unless otherwise specified) progression. Current research focus has been more towards FGFR1 amplification, the most common aberration.

Advanced-stage head and neck squamous cell carcinoma (HNSCC) remains a challenging disease with poor outcomes. Overall survival has improved by about 10% over the past 20 years, despite advances in treatment modalities. The paucity of information on the dominant oncogenic drivers has been a major challenge to the effective application of targeted therapies in HNSCC. Recurrent FGFR1 amplification is seen in 10% to 17% of head and neck20,21, and high FGFR2 and FGFR3 expression has been found in the majority of HNSCC cell lines.22,23 Higher expression levels of FGFR1, 2, and 3 were also found to be contributing to tumor initiation and early-stage progression in HNSCC.20,24 It has been shown that a reduction of FGFR3 levels in HNSCC cell lines led to a 35% decrease in cell proliferation and higher radiation sensitivity.23 The FGFR inhibitor PD173074 reduced cell proliferation and increased cell apoptosis in head and neck cancer in vitro and in vivo.25 An aberrant FGFR signaling pathway has been implicated in acquired resistance to bevacizumab, an anti-vascular endothelial growth factor antibody.26 Together, these results support that the aberrant FGFR pathway might be an important oncogenic pathway as well as a mechanism of acquired resistance to therapies in a subset of HNSCCs.

The FGFR pathway has been known to play a critical role in the tumorigenesis of bladder and gastric cancer.27,28 While FGFR1 amplification is frequently reported in lung and head and neck cancers, FGFR2 amplification has been reported in gastric cancer. However, FGFR3 mutation not usually found in head and neck cancers or lung cancers is not an uncommon characteristic of bladder cancer. FGFR3 is frequently activated by mutation and not by amplification in bladder cancer, and represents a potential target for therapy. FGFR3 mutations have been described in approximately 75% of low-grade papillary bladder cancers, and FGFR3 overexpression was identified in 42% of muscle-invasive diseases.27,29,30 FGFR1 amplification was also found in 3% of urinary bladder cancers.31 The anti-FGFR3 monoclonal antibody inhibits in vitro cell growth and in vivo tumor burden for bladder cancer cells with FGFR3 point mutation mutation.32
In gastric cancer, multiple FGFR alterations (except FGFR3 mutation) were detected in patients’ tumor specimens.33 In particular, FGFR2 amplification was observed from 4-7% in different studies, and intratumoral heterogeneity was observed in 24% of FGFR2 amplified cases.34,35 Furthermore, FGFR2 amplification may portend poor prognosis for patients with gastric cancer. Thus, FGFR2 has attracted significant attention as a potential therapeutic target for the development of novel personalized anticancer treatment. Several clinical trial studies have tried to functionally inhibit FGFR aberrancy in gastric cancer patients: small molecule pan FGFR inhibitors AZD4547 (NCT01457846, NCT01795768, and NCT00979134), TKI258 (NCT01719549, NCT01576380, and NCT01921673) and specific humanized monoclonal antibody FPA144 targeting FGFR2 (NCT02318329).

Previous studies in other cancers have led to clinical trials using FGFR inhibitors for lung cancer and HNSCC (Table 1).

Of the non-selective multikinase inhibitors, Dovitinib has a wide range of off-target effects including other receptors of the RTK (receptor tyrosine kinase) superfamily, in addition to FGFR3, vascular endothelial growth factor receptor (VEGFRs), FGFR1, platelet-derived growth factor receptor type 3 (PDGFR-3), FMS-like tyrosine kinase 3, stem cell factor receptor (c-KIT), and colony-stimulating factor receptor 1 is undergoing early phase clinical studies (NCT01831726, NCT01379534, NCT01732107, NCT01719549). In a phase III trial, another multikinase inhibitor, nintedanib, in combination with docetaxel compared to docetaxel plus placebo, showed a modest improvement in progression-free survival (PFS) 3–4 months versus 2–7 months; with a hazard ratio of 0–79 (P = 0.0019). The benefit was higher for the adenocarcinoma histology, where median overall survival was 6–12 months versus 3–10 months; HR 0–83 (P = 0·0359) favoring the combination group. Lucitanib is another novel dual inhibitor undergoing early-phase clinical trials. It targets FGFR in addition to VEGFRs and has been shown to have anti-angiogenic activity in addition to anti-tumor proliferation effects in preclinical studies (NCT01283945, NCT02109016).36 Ponatinib, another multi-target kinase inhibitor, has also been used against FGFR-driven tumors, and has completed accrual (NCT01761747).
Other selective FGFR inhibitors such as BGJ398, BAY1163877, AZD4547, and JNJ-42756493 are being evaluated in several cancers harboring FGFR amplification and mutation. While several are being tested in lung cancers and various other solid tumors, a few are available for head and neck cancer in early-phase clinical trials as well. BGJ398 is a pan FGFR kinase inhibitor that has been tested in a phase I dose esclation study in patients with advanced solid malignancies harboring either FGFR1 or FGFR2 amplification or FGFR3 mutations (NCT01004224). AZD4547, a novel and selective inhibitor of the FGFR1, 2, and 3 tyrosine kinases37, is investigated in a phase I/II clinical trial, assessing the efficacy, safety, and tolerability of this inhibitor compared with or without paclitaxel in patients with recurrent non-small–cell lung cancer (NCT01824901). An ongoing JNJ-42756493 phase I study includes efforts to optimize dose and schedule and to analyze biomarkers. Expansion cohorts are currently enrolling patients with FGFR-aberrant tumors, including lung and breast cancer (NCT01703481). Several other selective FGFR targeted agent candidates are in various stages of clinical trials (NCT01212107, NCT01976741, NCT01752920).

In terms of toxicity profiles, selective FGFR inhibitors havebeen able to overcome toxicity constraints of multi-target kinase inhibition, which often exhibit a wide range of toxicity. In the reported phase I results from the specific FGFR inhibitor JNJ-42756493 trial, the most common treatment-emergent adverse events included hyperphosphatemia (65%), asthenia (55%), dry mouth (45%), nail toxicity (35%), constipation (34%), decreased appetite (32%), and dysgeusia (31%).38 Dose-dependent elevations in serum phosphate have been noted to be a predicted pharmacodynamics effect of selective FGFR inhibition, and guidelines to manage the toxicity have been published.39

Given the tolerability of selective FGFR inhibitors with manageable side effect profiles, they could be used in combination with other targeted therapies or immunotherapies for improving anti-cancer activity. Given the rationale of FGFR pathway aberration for acquired resistance to EGFR directed therapies, FGFR inhibitors may have a role to overcome this resistance if used in combination. Another potential strategy could be to combine with downstream inhibitors, such as either PI3K pathway or RAF/MEK inhibitors. With the approval of anti-programmed cell death protein 1 (anti PD-1) antibody in SqNSCLC, a cancer known to have aberrations in FGFR pathways and anticipated approval of the same antibody in head and neck cancer40, future studies may be designed for the combination of FGFR inhibitors with immunotherapy. 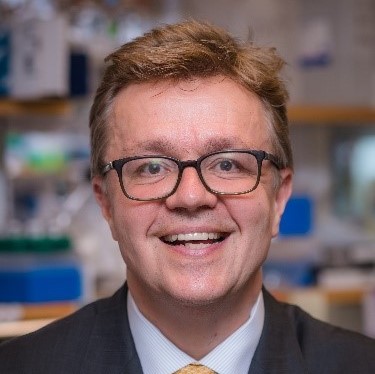