Despite the availability of 5 classes of drugs for the treatment of multiple myeloma (MM), the disease remains incurable in most cases, with patients eventually relapsing on each of these agents. The benchmark for drug approval is likely to be an overall response rate (ORR) of approximately 25% to 30% and progression-free survival (PFS) of approximately 4 months. This article reviews the targets, mechanisms of action (MOA), safety, and efficacy of the novel agents in MM that are currently thought to have the best chance of meeting these benchmarks, including the recently approved panobinostat. After a brief update on putative MOA of immunomodulatory (IMiDs) drugs, the following monoclonal antibodies (mAbs) are discussed: the CD38 antibodies daratumumab and SAR650982, the CS1 antibody elotuzumab, and indatuximab ravtansine—a CD138 antibody conjugated to maytansinoid. Non-mAbs discussed include inhibitors of histone deacetylases, kinesin spindle protein, AKT3, PIM kinase, and nuclear transport (XPO1).

Although there currently are 5 classes of drugs available for the treatment of multiple myeloma (MM; Table 1), the disease remains incurable in most cases, with patients eventually relapsing on each of these agents. The benchmark for drug approval based on 2 recent agents approved by the FDA (carfilzomib and pomalidomide) in the relapsed/refractory space is likely to be an overall response rate (ORR) of approximately 25% to 30% and progression-free survival (PFS) of approximately 4 months.1,2 The goal of this review is to discuss the targets, mechanisms of action (MOA), safety, and efficacy of the novel agents in MM that are currently thought to have the best chance of meeting these benchmarks. 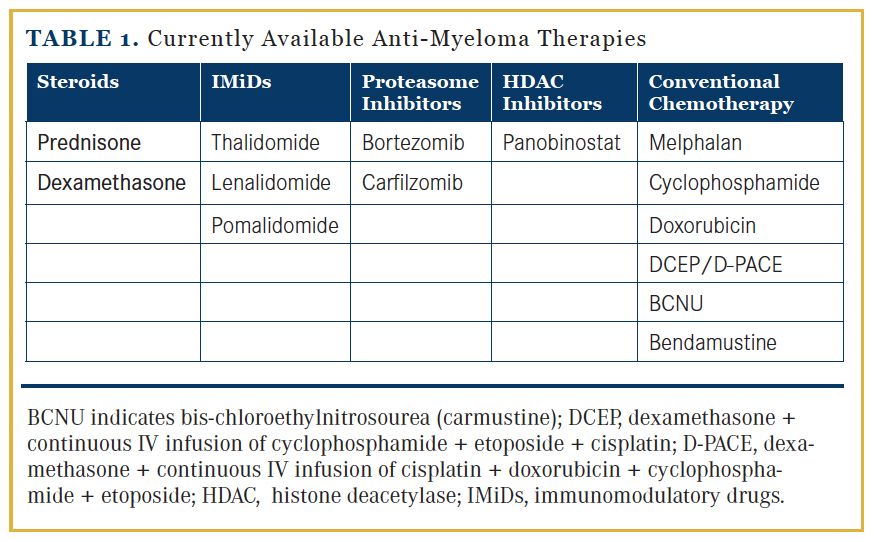 Of note, there also have been developments in our understanding of the targets of immunomodulatory drugs (IMiDs). Until recently, it has been unclear how these oral medications achieve antimyeloma benefits without significant toxicity at the site of drug absorption in the gut or other off-target organ toxicities. Recently, cereblon, a member of the E3 ubiquitin ligase family, was identified as the likely mediator of teratogenicity of IMiDs. Cereblon also implicates IMiDs in the dysregulation of the ubi-quitination process that targets proteins for proteasomal degradation.3 Malignant plasma cells, by virtue of being antibody/protein factories, have been demonstrated to be extremely vulnerable to such dysregulation by the proteasome inhibitor (PI) drug class. Moreover, additional work suggests that the immunologic changes associated with IMiDs may be due to Aiolos and Ikaros, which are not only substrates of cereblon, but also transcription factors involved in interleukin 2–mediated T cell activation.4 A better understanding of the MOA of these agents in MM will be essential to overcoming drug resistance and to developing the next generation of IMiDs and PIs.

Fortunately there are also several promising new drug targets in MM (Table 2). To date, there has been no rituximab—that is, a monoclonal antibody (mAb) with single-agent activity in MM. CD38 is a transmembrane glycoprotein and ectoenzyme with high receptor density on MM cells.5 The CD38 antibodies daratumumab and SAR650982 are both humanized IgG1 mAbs with multiple MOA, including antibody-dependent cellular cytotoxicity (ADCC) and phagocytosis, complement-dependent cytotoxicity, direct apoptosis induction, and inhibition of CD38 enzymatic activity.6 Other than manageable infusional toxicities expected with mAbs, both agents are well tolerated. In small phase 2 studies, both agents have shown single-agent activity with an overall response rate (ORR) in the range of 30% to 35% and 60% to 70% when combined with lenalidomide (Table 3).7-10 Daratumumab received breakthrough designation in May 2013 for patients with MM who have received more than 3 lines of therapy or are IMiD- and PI-refractory. Once these agents are approved, it is expected that they quickly will be moved throughout the disease spectrum, and also, based on preliminary data from combination studies demonstrating non-overlapping toxicity and improved efficacy, eventually be approved for administration with many of the agents in Table 1. 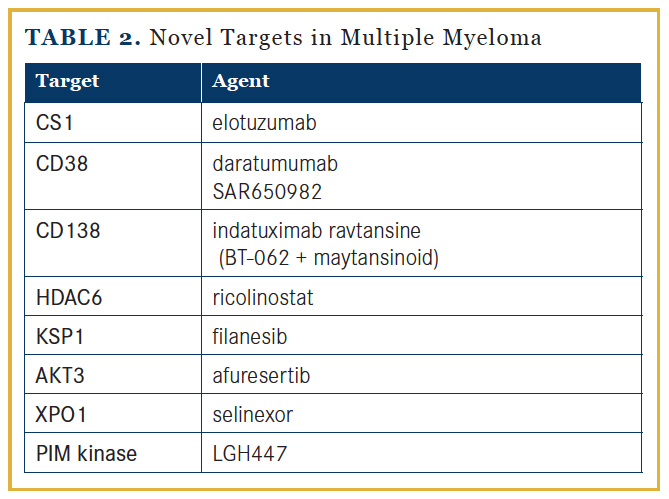 Another mAb that has already entered phase 3 studies in MM is elotuzumab, which is a humanized IgG1 mAb that targets cell surface 1 (CS1), a member of the SLAM family, which is uniformly and highly expressed in more than 95% of patients with primary MM, but not on stem cells or other normal tissues. The MOA appears to be ADCC-mediated by natural killer (NK) cells.11 Although elotuzumab has no significant singleagent activity, it has an excellent safety profile when given weekly for two 28-day cycles, and thereafter on days 1 and 15 in combination with a lenalidomide and dexamethasone backbone. Grades 3 and 4 toxicities are primarily hematologic and range from 10% to 15%, likely due to lenalidomide, except perhaps for lymphopenia. However, there was no significant increase in infections. In a phase 2 study of 36 lenalidomide-naïve patients who received elotuzumab 10 mg/kg in combination with lenalidomide and dexamethasone, the ORR was 92% and PFS was 33 months,12 relative to historic controls of lenalidomide-dexamethasone with an ORR of approximately 60% and PFS of 11 months.13,14 Elotuzumab received breakthrough designation by the FDA in May 2014 for more than 1 line of therapy given with lenalidomidedexamethasone.

The last mAb with an encouraging signal in MM is indatuximab ravtansine (formerly known as BT062), an anti-CD138 chimerized monoclonal IgG4 linked to the microtubule inhibitor maytansinoid (DM4). CD138 is primarily expressed on MM cells and also on epithelial cells, albeit to a lesser extent. Once the mAb binds to CD138, internalization and lyosomal processing of the linker releases the cytotoxic DM4 metabolites that result in apoptosis due to inhibition of tubulin polymerization.15 A phase 1 dose-escalation study showed dose-limiting toxicities of elevated gamma-glutamyltransferase, mucositis, and hand-foot syndrome. Serious adverse events also included gastrointestinal bleeding and corneal damage. Although monotherapy produced stable disease or better in 50% of patients, the ORR was only 4%, and therefore it is unlikely to move forward as a single agent.16 When combined with lenalidomide-dexamethasone, 100% of patients had stable disease or better, including an ORR of 75% in a small number of lenalidomide-refractory patients.17

Although MM cells are initially susceptible to PI therapy, the aggresome pathway is also responsible for the destruction of misfolded proteins. Dual pathway inhibition has demonstrated preclinical synergy.18 Two oral pan-histone deacetylase inhibitors (HDACs) have completed large phase 3 studies. The VANTAGE study19 comparing bortezomib and dexamethasone with either vorinostat or placebo showed only a disappointing 0.8-month improvement in PFS over the control arm. Morerecently, the PANORAMA 1 study20 with bortezomib (intravenous) and dexamethasone with either panobinostat or placebo showed a 3.9-month improvement in PFS and an improvement in complete response (CR) rates from 15.7% to 27.6%. However, the rates of grade 3 or 4 diarrhea increased from 8% to 25%. Most likely, the diarrhea is attributable to the combination of panobinostat with intravenous bortezomib, as these rates of diarrhea have not been seen when panobinostat is combined with subcutaneous bortezomib, carfilzomib, or lenalidomide.21-23 Moreover, PANORAMA 224 demonstrated that the addition of panobinostat to bortezomib in bortezomib-refractory patients resulted in a response rate (RR) of 34.5% and PFS of 5.4 months. Panobinostat was approved by the FDA on February 23, 2015, in combination with bortezomib and dexamethasone in patients who have received at least 2 prior regimens (including bortezomib and an IMiD). Ricolinostat, an oral specific inhibitor of HDAC6, a key component of the aggresome pathway, is also under investigation (Table 4). 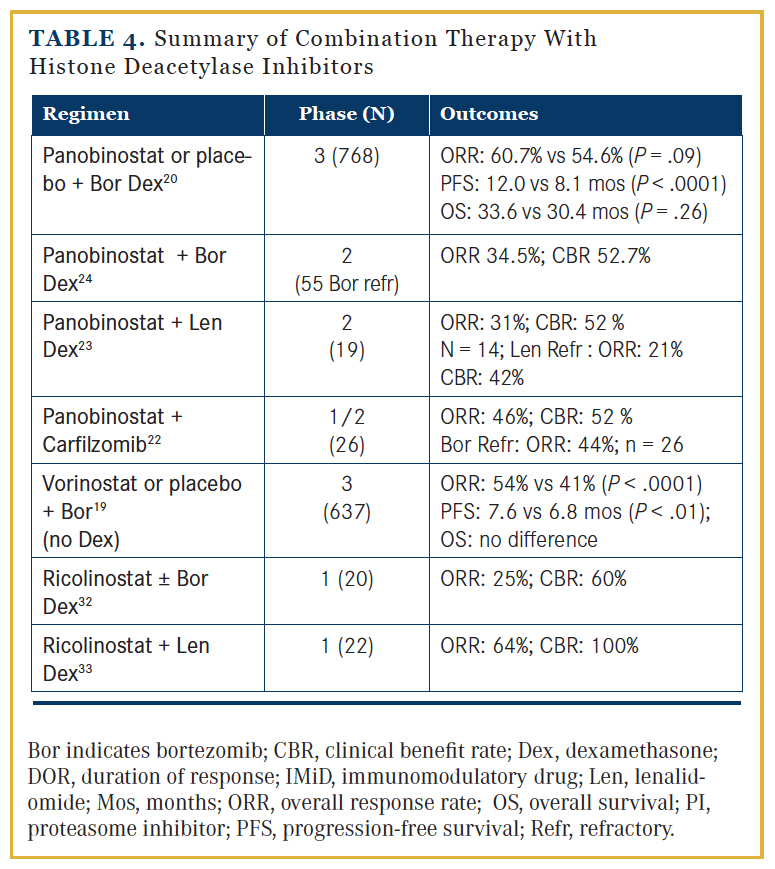 There are additional non-mAb novel agents with single-agent activity in development (Table 5). Filanesib is a highly selective allosteric inhibitor of kinesin spindle protein (KSP), which is a microtubule motor protein. KSP inhibition prevents formation of a bipolar spindle, leading to apoptosis particularly in Mcl-1–dependent MM cells. As a single agent, the main toxicity is neutropenia, which is manageable with prophylactic granulocyte-colony stimulating factor (GCSF). As a single agent, the ORR is 16% and the median PFS is 3.7 months (n=32), which is comparable to the 15% and 3.4 months with the addition of dexamethasone to filanesib (n=55), albeit this was in a much more heavily pretreated, IMiD- and PI-refractory population. Of particular interest though, is the potential biomarker alpha 1-acid glycoprotein (AAG), an acute-phase protein used to monitor inflammatory conditions. AAG binds to filanesib such that high AAG concentrations result in increased IC50 for filanesib in vitro. Lower AAG levels seem to correlate with clinical outcomes, as such patients had an ORR without dexamethasone of 24% and a median PFS of 5.1 months.25 Although linking drug approval to a novel biomarker is not an easy path forward, to date, there are no biomarkers predictive of response in MM, and KSP inhibition is a novel MOA in MM. Filanesib was granted orphan drug approval by the FDA in May 2014.

The phosphatidylinositide 3-kinase (PI3K)-AKT-mammalian target of rapamycin (mTOR) signaling pathway is activated in MM, and preclinically, inhibition of this pathway leads to apoptosis.26 The oral AKT3 inhibitor afuresertib showed a single-agent RR of 8.8%.27 PIM kinases also promote tumor cell proliferation and survival, and are overexpressed in hematologic malignancies.28 The pan-PIM kinase inhibitor LGH 447 recently demonstrated a monotherapy RR of 10.5%.29 While the single agent responses for afuresertib and LGH 447 are modest, better patient selection or combination strategies may be more efficacious.

Finally, the nuclear protein exportin 1 (XP01) is a promising target in oncology. Preclinically, inhibition of XPO1 induced MM cytotoxicity and impaired osteoclastogenesis.30 Although the data are very preliminary, the nuclear transport inhibitor known as selinexor (KPT-330) has already demonstrated activity. In 8 patients with MM who were refractory to all drug classes and were treated with selinexor and dexamethasone, the response rate was 50%.31

Although PIs and IMiDs have yielded significant improvement in MM outcomes, the currently available classes of drugs can take us only so far, as evidenced by the modest ORR and PFS of recently approved agents. Further improvements will require a better understanding of myelomagenesis, a better understanding of the mechanisms of resistance to current agents, biologically guided/risk-adapted therapy, and finally, the development of agents with novel targets. Fortunately, as reviewed here, there are many such promising agents. 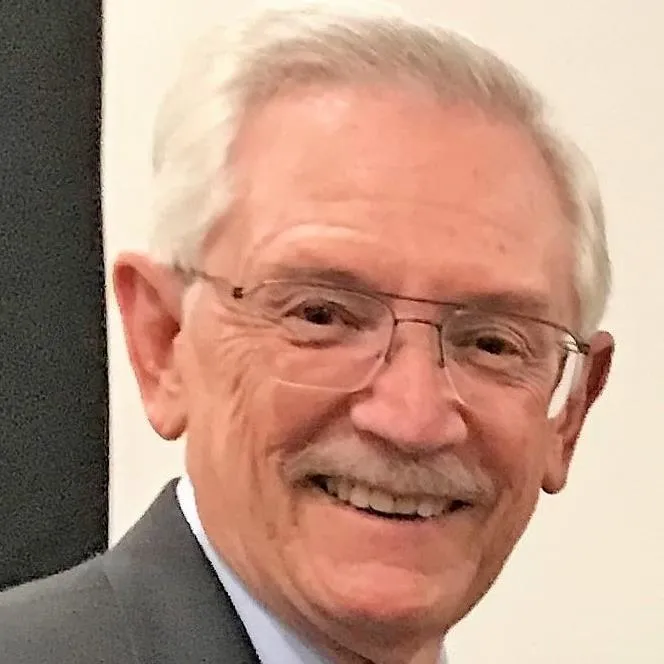