The recent success of PD-1 and PD-L1 inhibitors in the treatment of non-small cell lung cancer (NSCLC) has opened a new era of immunotherapy for lung cancer. Combinatorial strategies are increasingly being pursued, with many trials investigating combinations of checkpoint inhibitors with other immunomodulatory agents, targeted therapies, and chemotherapies. This review describes recent and emerging data regarding combinatorial strategies in NSCLC.

While lung cancer historically has not been thought of as being susceptible to immunomodulation, the recent success of PD-1 and PD-L1 checkpoint inhibitors in non-small cell lung cancer (NSCLC) has overturned the conventional wisdom. The FDA recently approved nivolumab for the treatment of squamous NSCLC, based on the results of Checkmate-063 and Checkmate-017. Checkmate-063 was a multicenter phase II study of nivolumab in patients with squamous cell lung cancer; of 117 patients, 17 (14.5%) had an objective response and 30 (26%) had stable disease (SD).1 Checkmate-017 was a phase III trial comparing nivolumab with docetaxel in previously treated squamous lung cancer; this study showed an overall survival (OS) benefit of 9.2 versus 6.0 months in favor of nivolumab.2 With the report of a survival benefit in the similarly designed Checkmate-057 trial, a phase III trial of nivolumab versus docetaxel in nonsquamous lung cancer,3 we can expect that this approval will likely be broadened in the near future to encompass nonsquamous NSCLC, as well. While nivolumab is the first PD-1 inhibitor to gain FDA approval for NSCLC, multiple other PD-1 and PD-L1 inhibitors are in development.4,5 Although no head-to-head comparisons exist, in early-phase trials the response rates of these agents have been broadly similar, suggesting a similar range of single-agent activity in this class of drugs.

Multiple ongoing studies are investigating the question of whether one of the following 3 immunotherapy combinations can yield additional benefit: (1) immunotherapies combined with each other; (2) immunotherapy combined with targeted therapy; or (3) immunotherapy combined with chemotherapy. The rationale for combining therapies is perhaps best illustrated by the cancer-immunity cycle proposed by Chen and Mellman.6 This cycle details the series of cyclical steps needed for an anticancer immune response to lead to effective killing of cancer cells. These steps include: the release of cancer cell antigens; antigen presentation by dendritic cells and antigen-presenting cells; priming and activation of T-cell responses against the cancer-specific antigens; trafficking of T cells to tumors; infiltration of T cells into tumors; recognition of cancer cells by T cells; and, finally, killing of the cancer cells, which then leads to further release of antigens and continues the cycle.6

Combining agents that target different parts of this cycle may lead to synergistic effects. CTLA-4 and PD-1/PD-L1 inhibitors act at different parts of this cycle, CTLA-4 primarily at the level of T-cell activation and PD-1/PD-L1 at the level of the tumor microenvironment; this, therefore, is the rationale for combining these different checkpoints.7 Conventional chemotherapy and targeted therapies can result in tumor regression and trigger immunogenic cancer cell death, and immune checkpoint blockade can consolidate this response by inducing long-lasting, immune-mediated tumor control.8 The ways in which chemotherapies and targeted therapies may affect the immune system are varied and complex in their interactions. Some therapies may elicit immunogenic tumor cell death, which results in specific signals that trigger activation of antitumor immune responses.9-11 Other therapies may stimulate the immune system in a variety of ways, by modulating the interplay of immunosuppressive and immunostimulatory effector cells.8-12

Potential immunomodulatory effects of targeted therapies and chemotherapiesincludeattenuatingtheactivityofspecificimmune cell populations that restrain cytotoxic T cells, augmenting tumor antigen presentation by dendritic cells, enhancing priming and activation of tumor-specific T cells, and sensitizing tumor cells to immune-mediated destruction.8-12 For example, paclitaxel and gemcitabine may enhance T-cell activation, and taxanes may modulate dendritic cells.8 Bevacizumab may increase priming to T cells by stimulating dendritic cell maturation and inhibition of myeloid-derived suppressor cells (MDSCs).8,12 EGFR activation has been shown to lead to an immunosuppressive environment, including upregulation of PD-L1 expression, and mice with EGFR-mutated  tumors  treated  with  a  PD-1  inhibitor  had decreases in tumor volumes and increased survival.13 However, preliminary data from the phase III trial of nivolumab versus docetaxel in a limited number of patients with EGFR mutation-positive tumors did not suggest an OS benefit from nivolumab when compared with docetaxel (hazard ratio [HR], 1.18),3  and the best strategy for treating patients with EGFR mutations with immunotherapy remains an ongoing question under active investigation.

It is also becoming increasingly clear that different tumors display different immunophenotypes. Patients with a T-cell inflamed tumor microenvironment with robust, spontaneous, antitumor T-cell response and patients with a noninflamed tumor microenvironment and minimal spontaneous antitumor T-cell response likely will require different strategies for optimal responsiveness  to  immunotherapy.14   Interventions that can induce immune inflammation at the tumor site likely will be required to convert those with a noninflamed phenotype into an inflamed phenotype.14 Indeed, combinatorial strategies may be required in order to yeild best responses in this setting.

How best to combine chemotherapy, targeted therapy, and immunotherapy remains an ongoing area of active investigation, and multiple clinical trials are testing these concepts in patients.

Multiple ongoing studies are now investigating the combination of the PD-1/PD-L1 checkpoint inhibitors with chemotherapy in the first-line setting in NSCLC. It should be noted that reported results are all preliminary and in abstract form, so no definitive data or conclusions are possible. However, in the aggregate they do show the feasibility of this approach, and further study is warranted.

Antonia et al16  reported on the experience with nivolumab combined with chemotherapy at the 2014 Annual Meeting of the American Society of Clinical Oncology (ASCO). Patients received nivolumab with  cisplatin/gemcitabine, cisplatin/pemetrexed, or carboplatin/paclitaxel. In this preliminary report, response rates ranged from 33% to 47% in the various combination arms. Treatment-related, grade 3-4 adverse events (AEs) were reported in 45% of patients, with the most common being pneumonitis (n = 4, 7%), renal failure (n = 3, 5%), and fatigue (n = 3, 5%).

Papadimitrakopoulou et al18 reported data on the combination of pembrolizumab and chemotherapy (carboplatin/paclitaxel [cohort A] or carboplatin/pemetrexed [cohort C]) at ASCO 2015, with results from 49 patients reported. The treatment-related, grade 3-4 AE rate was 32% to 38%. Potentially immune-related AEs were reported in 2 patients (8%) in cohort A (grade 3 rash and grade 2 colitis), and 4 patients (17%) in cohort C (grade 3 colitis, grade 2 hypothyroidism, and grade 1 colitis and hyperthyroidism). The preliminary response rate was 28% for the combination with carboplatin/paclitaxel and 58% for the combination with carboplatin/pemetrexed.

In general, these studies as reported thus far have shown the feasibility of combining chemotherapy with immunotherapy, with some intriguing signals of efficacy and potentially durable responses. 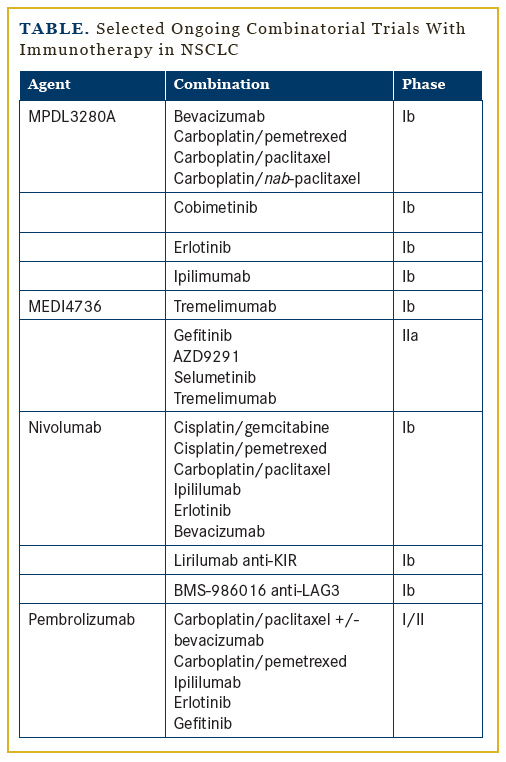 The fact that CTLA-4 inhibitors and PD-1/PD-L1 inhibitors act at different points in the cancer immunity cycle highlights the logic of combining these checkpoint inhibitors in the hope of achieving a synergistic effect. In melanoma, the combination of nivolumab and ipilimumab has shown impressive clinical activity, with a 40% ORR and rapid tumor regression seen in many of the responders. This came at a cost of significant toxicity, with 53% of patients experiencing grade 3-4 AEs.19

Multiple studies are ongoing combining CTLA-4 inhibitors with the various PD-1 and PD-L1 inhibitors in lung cancer. As with the chemotherapy and immunotherapy combination studies, these studies are all generally ongoing, and preliminary results have been reported thus far.

Antonia et al20 reported preliminary data at ASCO 2014 on 49 patients treated with the combination of nivolumab plus ipilimumab. Patients received either nivolumab 1 mg/kg plus ipilimumab 3 mg/kg, or nivolumab 3 mg/kg plus ipilimumab 1 mg/kg for 4 cycles, followed by nivolumab alone. Treatment-related, grade 3-4 AEs occurred in 49% of patients, and 35% of patients discontinued study drugs due to treatment-related AEs. The most common grade 3-4 treatment-related AEs included diarrhea (n = 5, 10%), ALT elevation (n = 4, 8%), AST elevation (n = 4, 8%), colitis (n = 4, 8%), lipase elevation (n = 4, 8%), fatigue (n = 3, 6%), and pneumonitis (n = 3, 6%). The discontinuation rate due to drug-related AEs was highest in the nivolumab-1-mg/kg/ipilimumab 3-mg/kg-nonsquamous arm, and most discontinuations occurred during the concurrent phase of treatment. The response rate ranged from 11% to 33%, with some patients having prolonged duration of response.

Multiple trials of targeted therapy and immunotherapy are in progress, but the data are very early. Rivzi et al23 reported preliminary data on the combination of erlotinib plus nivolumab among patients with EGFR-mutated lung cancer who were chemotherapy-naïve. Of 21 patients, all but 1 had had prior treatment with erlotinib, although it is unclear whether this was immediately preceding treatment. The ORR was 15% and SD 45%. Treatment-related AEs were seen in 24% of patients, with diarrhea (n = 2), increased AST (n = 2), and increased ALT (n = 1) being most common.

Oxnard et al25 reported preliminary results at ASCO 2015 of the TATTON trial. In this phase Ib study, the third-generation EGFR inhibitor AZD9291 is combined with the PD-L1 inhibitor MEDI4736, the MET inhibitor AZD6094, or the MEK inhibitor selumetinib in patients with EGFR mutations with

T790M resistance and progression on prior EGFR therapy. In this preliminary report, 23 patients had been enrolled in the combination arm of AZD9291 plus MEDI4736. AZD9291 was given at 80 mg once daily, and MEDI4736 was dose-escalated up to its monotherapy phase III dosage. There was 1 DLT of grade 3 neutropenia at the MEDI4736 dosage of 10 mg/kg every 2 weeks. There was 1 CR and 8 PRs among 14 evaluable patients. Expansion cohorts to further evaluate efficacy are ongoing.

Multiple other studies are in progress combining targeted therapies with PD-1 and PD-L1 inhibitors, and data from these studies are awaited.

Immunotherapy is the newest frontier in lung cancer treatment. Single-agent activity of PD-1 and PD-L1 inhibitors has been promising with activity across multiple histologies, and among responders, a quality and duration of response that is markedly different from that of conventional chemotherapy. Combinatorial strategies are being actively investigated to build on the single-agent activity. Much of the data regarding combination therapies are preliminary in nature, and we await the final results of the multiple, ongoing combinatorial studies to determine best strategies moving forward. While there is much hope and promise with the activity of PD-1 inhibitors in NSCLC, clearly there is much more work to be done. The next great challenge is to increase the response rate from approximately 20% for single-agent PD-1 therapy. One of the areas of greatest hope lies in trying to augment or potentiate the immune response so that more patients can benefit from this overarching strategy. While the CTLA-4 and PD-1 combinations have been beleaguered by toxicity, other combinations acting at different points in the immune cycle are being explored and also hold great interest. With further investigation, combinations that have manageable toxicity profiles while augmenting the immune response are expected and eagerly awaited.