Improvements in neoadjuvant therapy have allowed more women to be candidates for breast-conserving therapy (BCT). “Oncoplastic” surgery, which combines plastic surgery techniques with oncology surgery, developed as a way to reconstruct defects that occur following partial mastectomy. A variety of oncoplastic techniques are available that primarily depend on breast size, tumor-to-breast ratio, degree of ptosis, and radiation history. Additionally, in those women who are not candidates for BCT and require mastectomy, modifications have been made to improve aesthetic and patient-reported outcomes. Care is taken to preserve the entire skin envelope and nipple areolar complex, and reconstruction focuses on creating a soft, natural breast. This review provides an overview of the various techniques for breast reconstruction. It also discusses which factors influence the reconstructive algorithm, and the outcomes of various techniques, with a focus on the influence of chemotherapy and radiation therapy on these outcomes.

In patients with breast cancer who require mastectomy, surgeons now place greater emphasis on preserving the external nipple-areolar complex (NAC) and the entire breast skin envelope.10-13 At many institutions, nipple-sparing mastectomy or total skin-sparing mastectomy is now the standard of care for women who require mastectomy.14 Implant-based and autologous tissue reconstructions have evolved to provide a more natural appearance and feel to the reconstructed breast. These changes have led to higher patient satisfaction and improved aesthetic results.11,12,15,16 This, in turn, has led to higher rates of contralateral and bilateral prophylactic mastectomies in women who previously hesitated when aesthetic results were not as successful.17

Even with the greater focus on aesthetic and patient-reported outcomes and on breast conservation, equivalent oncologic safety has been maintained.14,18-20 This is partly attributed to the expanding use of chemotherapy and radiation therapy (RT).21 Both are critical components of breast cancer treatment, but markedly increase the complexity of reconstruction and influence the timing of reconstruction.22,23

The most straightforward oncoplastic technique involves local tissue rearrangement.25 This is reserved for patients with adequate breast tissue (B or C cup), minimal ptosis, sufficient skin, and small tumors.24,27,28 This involves a redistribution and re-arrangement of the remaining breast tissue following lumpectomy, to prevent a large regional cavity. If there is insufficient adjacent tissue, local or regional soft-tissue flaps can be used, such as flaps from the subaxillary region or the latissimus dorsi flap.27,28

Mastopexy (breast lift) and oncoplastic reduction mammoplasty have become invaluable techniques in treating large-breasted patients with ptosis who require some additional skin resection (Figures 2 and 3).29-31 Tumor location dictates the incision pattern, as there are many possible options. Oncoplastic reduction mammoplasty provides the added benefit of a symmetrizing contralateral reduction, which improves the overall cosmetic outcome.5,32 This technique enables wide tumor resections,4,33 which extends the option for BCT1,2 without compromising oncologic safety.3,34 Additionally, in women who require RT, this technique can be used as a strategy for reducing complication rates.3 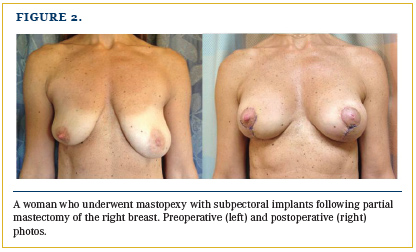 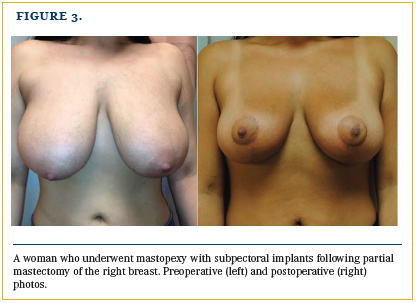 Mastectomy can be categorized into 4 types: simple, skin-sparing, nipple-sparing, and total skin-sparing. In simple mastectomy, all of the breast parenchyma, NAC, and excess breast skin are removed. Skin-sparing mastectomy preserves the skin envelope but removes the NAC. In nipple-sparing mastectomy, the skin and NAC are preserved. Finally, in total skin-sparing mastectomy, the entire skin envelope and NAC are preserved, and the nipple tissue beneath the NAC is completely cored out.35,36 Reconstruction following mastectomy is either implant-based, autologous tissue–based, or a combination of the 2. Abdominally based flaps are the preferred autologous tissue for breast reconstruction given their reliability and tissue bulk. These flaps may be rotated on a vascular pedicle, thus maintaining their original blood supply, or may be transferred as free flaps, which require a microvascular anastomosis to provide new blood flow. Transverse rectus abdominus myocutaneous (TRAM) flaps may be used as pedicled flaps or as free flaps. However, these put patients at risk for developing abdominal hernias because muscle and fascia are removed from the abdomen. Muscle-sparing TRAM flaps have minimized this donor site morbidity. Going one step further, deep inferior epigastric perforator (DIEP) flaps were developed, which leave the entire abdominal musculature and fascia intact.

The initial decision when planning reconstruction is determining when the reconstruction should be performed, either immediately at the time of mastectomy or in a delayed fashion following healing from mastectomy. Delayed breast reconstruction offers suboptimal aesthetic outcomes, as it does not allow for maintenance of the shape of the original breast skin envelope. Furthermore, this technique does not allow for aesthetic preservation of the NAC position, due to postmastectomy skin healing and contraction on the chest wall, and is thus only compatible with skin-sparing mastectomy techniques (non–nipple-sparing).

Immediate prosthetic breast reconstruction is the authors’ preferred technique, as it offers superior aesthetic outcomes and allows for preservation and aesthetic positioning of the NAC on the reconstructed breast mound. Most commonly, this is done as a 2-stage process, with a tissue expander placed at the time of mastectomy and only partially filled. Over the following months, the tissue expander is slowly inflated to redevelop the breast pocket. Following completion of expansion, the patient undergoes operative exchange of the expander for a permanent breast implant.

Complications specific to prosthetic reconstruction include capsular contracture, implant malposition, implant exposure, and implant deflation.42 In cases of immediate prosthetic reconstruction, the reported infection rate is 7% to 13% in the nonradiated population.46 The majority of these cases resolve with antibiotic treatment. Cases of cellulitis generally resolve with a course of outpatient antibiotic therapy, while deeper-tissue infections may require intravenous (IV) antibiotics for resolution. Ultimately, 3% of patients will require an operative washout for resolution of infection. The reported explantation rates range from 2% to 5%, and this includes explantation for all indications (ie, infection, expander/implant exposure, and capsular contracture).

The addition of postmastectomy RT significantly alters the outcomes profile of immediate breast reconstruction. This is due to the significant reduction in microvascular skin circulation induced by external-beam radiation therapy (EBRT) and its subsequent effect on healing and antibiotic delivery to the skin envelope. In this patient cohort, rates of infection range from 22% to 26%, with cellulitis the predominant finding in the vast majority of cases. Ultimately, the explantation rate in this population varies widely. Sbitany et al46 and Spear et al47 reported overall failure rates in the population undergoing immediate prosthetic reconstruction with postmastectomy RT of 17.7% and 21.4%, respectively. The Italian experience reported by Nava and colleagues48 indicated a 40% failure rate in the same population.

The vastly different reported failure rates in the radiated population are likely multifactorial, but one caveat that has been reported to significantly influence complication rates is the use of acellular dermal matrix (ADM) to cover the prosthesis at the time of placement. ADM is decellularized human or animal tissue that can be safely placed within the breasts over a device, and revascularizes to provide added coverage and protection over the implant. Seth et al49 reported a significant reduction in implant-related complications in the setting of EBRT when ADM was used to cover the implant versus when no ADM was used. Similar findings have been reported by Spear et al47 and Sbitany et al.46

The effects of chemotherapy on immediate prosthetic breast reconstruction outcomes reported in the literature are similarly wide ranging and conflicting.50,51 However, the majority of studies show women who receive chemotherapy do not have higher overall complication rates.52,53 Donker et al53 analyzed the effect of neoadjuvant chemotherapy on complications in women undergoing skin-sparing mastectomy and immediate prosthetic reconstruction. Surprisingly, they found that the overall rate of short-term postoperative complications was significantly less among neoadjuvantly treated women (15% vs. 29%; P = .042), but this did not reduce the rate of prostheses lost (8% vs 11%; P = .566). The higher complication rate in the control group was primarily influenced by higher rates of skin necrosis. The investigators attributed this reduced incidence of complications in neoadjuvant patients to their younger age, fewer comorbidities, and lower incidence of smoking.

It is our clinical experience that immediate breast reconstruction does not delay the initiation of adjuvant chemotherapy when reconstruction is performed with placement of a tissue expander at the time of mastectomy. Great care is taken not to overfill the expander at the time of placement. This reduces the tension on the overlying skin envelope as it heals, and thus reduces the incidence of wound dehiscence and skin necrosis that may delay the initiation of chemotherapy.

A review of our institutional database was also performed to assess the effects of trastuzumab and hormonal therapy on patients undergoing total skin-sparing mastectomy and immediate tissue expander placement for reconstruction. With regard to the complications assessed (nipple necrosis, skin necrosis, infection, expander/implant loss or removal), no statistically significant differences were found between the patients treated with trastuzumab and the patients not treated. A similar review of patients treated with hormone therapy showed statistical differences only in the incidence of seroma (relative risk [RR], 3.43; P = .007) and minor skin necrosis (RR, 2.97; P = .021). The incidence of all other complications assessed in patients taking hormonal therapy treatment was statistically equivalent to those patients not being treated.

Based on our clinical experience and data, we advocate specific timing regimens and algorithms for patients undergoing immediate prosthetic breast reconstruction at the time of mastectomy. We have found that these timing schemes help to minimize surgical risk. For those patients undergoing neoadjuvant chemotherapy, we recommend surgery 1 month after the final infusion is administered. Furthermore, for those patients on hormonal therapy, we recommend patients discontinue therapy 2 to 3 weeks before surgery to reduce the risk of minor skin necrosis and wound dehiscence. We advocate waiting 4 to 6 weeks prior to initiation of chemotherapy infusions for patients requiring adjuvant chemotherapy after mastectomy and prosthetic reconstruction. Additionally, we recommend that no tissue expansion be performed during chemotherapy treatment, but rather that expansion should proceed following completion of all infusions. For patients undergoing postmastectomy EBRT, we recommend full and complete expansion of the tissue expander prior to radiation delivery. We wait to exchange the tissue expander for a silicone implant until RT has finished. We recommend waiting 6 months after completion of RT for this exchange operation, as this has been shown to reduce wound dehiscence and implant extrusion rates.64

The management of breast cancer has changed dramatically over the last 30 years. Improvements in neoadjuvant therapy and surgical techniques have allowed more women to be candidates for BCT. As a result, oncoplastic surgical techniques were developed and subsequently became invaluable to the field of reconstructive surgery, as well as to the comprehensive treatment of breast cancer. Oncoplastic techniques minimize breast deformities following cancer resection and treatment, while maintaining equivalent oncologic outcomes. Additionally, modifications to mastectomy techniques have significantly improved aesthetic results and patient satisfaction, and as a result, there has been a rise in prophylactic and bilateral mastectomies. Surgeons routinely preserve the entire breast envelope and NAC. The primary focus in implant and autologous-based reconstruction is recreating a breast that appears and feels natural. Outcomes research has enabled us to identify the risk-inducing effects of chemotherapy and RT on breast reconstruction. Based on these outcomes studies, we have identified various timing and technique algorithms to help minimize the risk in postmastectomy breast reconstruction. 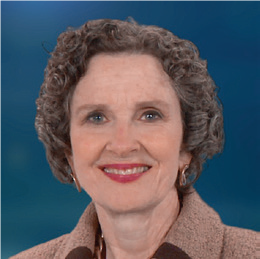 Navigating Treatment Options for HER2+ Breast Cancer Across the Disease Continuum: An Expert Tumor Board Discussion
Expires on
January 8, 2022
CME
2.0
Start Activity