The identification of molecular oncogenic driver mutations and the development of targeted therapies have significantly changed the management of patients with metastatic non-small cell lung cancer (NSCLC). Tyrosine kinase inhibitors (TKIs) have demonstrated increased efficacy and tolerability compared with cytotoxic chemotherapy in the treatment of patients with EGFR mutations and ALK translocations, and are now the standard of care for first-line treatment.1,2 This has led to increased efforts to identify additional oncogenic drivers and to match molecular alterations with effective targeted therapies.

Molecular profiling has revealed significant heterogeneity in NSCLC, and has led to the identification of molecular driver mutations in more than 50% of patients with NSCLC (Figure). Most identified molecular driver mutations are found in only a small percentage of patients, but these molecular abnormalities are clinically significant in the setting of 1.8 million people being diagnosed with NSCLC worldwide each year.3 This review will focus on the current therapeutic strategies targeting ROS1, KRAS, BRAF, RET, and PI3K in the treatment of NSCLC. Most of these drugs and treatment combinations are in early phases of development and demonstrate the importance of molecular testing and ongoing research in this field. 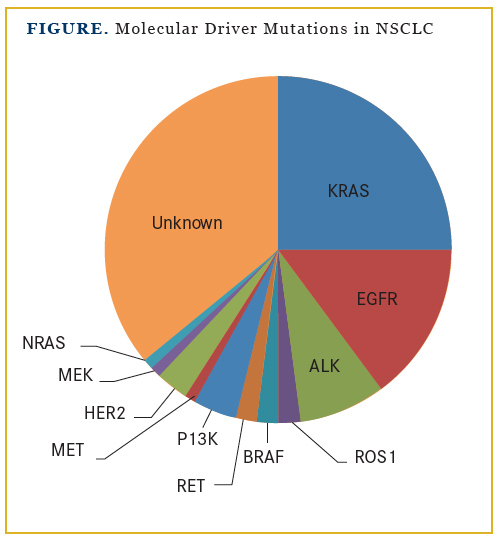 The ROS1 oncogene encodes for a receptor tyrosine kinase (RTK) that is a member of the insulin-receptor family and is related to ALK. Rearrangements or translocations of ROS1 result in increased kinase activation and can be identified with fluorescence in situ hybridization (FISH). They are found in approximately 1% of patients with lung adenocarcinoma.4 These rearrangements are mutually ex-clusive of other oncogenic driver mutations and tend to be found in younger patients with little or no smoking history. ALK and ROS1 share 77% amino acid identity at the ATP-binding site, and crizotinib is able to bind with high affinity to both.

Crizotinib has been shown to have significant antitumor activity in patients with advanced ROS1-rearranged NSCLC, with a response rate of 72% and median progression-free survival (PFS) of 19.2 months, although 25 patients (50%) were still in follow-up at the time of data publication.5 While not yet approved by the US Food and Drug Administration (FDA) for this indication, crizotinib is a promising therapeutic option for patients found to have a ROS1 translocation, and should be considered as an alternative to chemotherapy. Studies are now ongoing to identify additional therapies that may be effective in targeting ROS1, including ceritinib, a second-generation ALK inhibitor (ClinicalTrials.gov Identifier: NCT02186821), and cabozantinib, a multi-TKI with effects on VEGF receptor 2 (ClinicalTrials.gov Identifier: NCT01639508). Efficacy data for these strategies are not yet available.

The most frequently mutated oncogene in NSCLC is KRAS, which is found in approximately 25% of lung adenocarcinomas.6 The RAS genes encode for membrane-bound GTP binding proteins, which are part of the RAS/MAPK signaling pathway linking EGFR activation to cell proliferation and survival.7 Mutations in the KRAS gene tend to be mutually exclusive from EGFR mutations and ALK translocations, and are believed to be a negative prognostic factor for survival.

Research efforts to identify effective treatment strategies have mainly focused on downstream targets of KRAS. Selumetinib, a selective inhibitor of MEK1/2, has been evaluated in a phase II study in which patients with advanced KRAS-mutated NSCLC who had progressed on prior therapy were randomized to selumetinib 75 mg daily and docetaxel 75 mg/m2 every 21 days versus placebo and docetaxel administered at the same dosage. There was a statistically significant improvement in PFS and a trend toward improvement in overall survival (OS) in those treated with the combination therapy.8 Although the study failed to meet its primary endpoint of OS, results were promising enough to proceed with a randomized phase III study of selumetinib in combination with docetaxel with PFS as the primary endpoint (ClinicalTrials.gov Identifier: NCT01933932). Ef-ficacy data from this study are not yet available.

Development of effective targeted treatment strategies for patients harboring a KRAS mutation is complicated by the heterogeneous genetic profile of these patients. Response to a therapy may vary based on the specific KRAS point mutation present. In a phase I/Ib study, a total of 47 patients with both KRAS-mutant and wild-type NSCLC were treated with a combination of docetaxel and tremetinib, a MEK 1/2 kinase inhibitor. The median overall response rate (ORR) for all patients was 32% regardless of genotype; however, patients with a G12C point mutation in KRAS had an increased response rate (40%) and a trend toward increased PFS.9 The presence of other co-mutations in addition to the specific KRAS mutation may also impact tumor response to therapy. Preclinical data have shown that the presence of p53 or LKB1 in addition to KRAS mutations may impact tumor sensitivity to specific therapies.10 A greater understanding of how specific KRAS mutations and co-mutations impact drug sensitivity is needed before effective targeted treatment strategies are likely to be identified.

BRAF is a downstream signaling mediator of KRAS and activates the MAP kinase pathway. Mutations in BRAF are found in 1% to 4% of patients with lung adenocarcinoma and are usually associated with a history of smoking.11,12 The BRAFV600E mutation makes up only about 50% of the identified mutations within the gene.13 Given the high response rate of BRAF-mutant melanoma to targeted TKIs, studies are being done to identify effective targeted therapies for this mutation in NSCLC.

Patients with NSCLC with a BRAFV600E mutation who progressed on first-line therapy were enrolled in an open label, single-arm, phase II study and were given dabrafenib 150 mg twice daily, with response rate as the primary endpoint. Data presented at the 2013 An-nual Meeting of the American Society of Clinical Oncology (ASCO) demonstrated an ORR of 54%, resulting in breakthrough designation from the FDA for its potential as a second-line treatment for patients with this mutation.14 The safety profile was similar to that reported in the treatment of melanoma. More efficacy data will become available as the study proceeds into the expansion phase, in which dabrafenib will be given as monotherapy or in combination with tremetinib (ClinicalTrials.gov Identifier: NCT01336634).

The RET gene encodes a cell-surface RTK that activates downstream signaling pathways that lead to cellular proliferation and migration.4 Germline mutations of RET are found in almost all inherited forms of medullary thyroid cancer (MTC) and up to 50% of sporadic MTC cases, with most being point mutations within the gene. Chromosomal rearrangements involving the RET gene have been found in 1% to 2% of patients with NSCLC, and tend to occur in younger patients with light-smoking history.4 Screening is most commonly done with reverse transcription-polymerase chain reaction (RT-PCR), with fluorescence in situ hybridization (FISH) as an alternative or confirmatory tool. These translocations are mutually exclusive of EGFR, HER2, BRAF, KRAS, ALK, and ROS1 alterations. Cabozantinib may be a potential targeted therapy for patients with a RET mutation, and it has demonstrated efficacy in a case series that included 3 patients.15 A phase II study is currently under way in which patients with molecular alterations in RET, ROS1, NTRK, or increased MET or AXL activity are treated with cabozantinib 60 mg daily to evaluate ORR, PFS, OS, and safety (ClinicalTrials.gov Identifier: NCT01639508).

Activation of the phosphatidylinositol 3-kinase (PI3K) signaling cascade is initiated by stimulation of multiple transmembrane receptors, including EGFR, HER2, VEGFR, and insulin-like growth factor receptor, and is involved in the regulation of multiple cellular processes, including growth and proliferation.16 There are multiple activating mutations of this pathway, which are found in 2% to 5% of lung adenocarcinomas and 8% to 10% of squamous cell lung cancers, and can occur with EGFR or KRAS mutations.17-20 Overactivation of AKT is detected in 30% to 75% of NSCLC and promotes resistance to chemotherapy and radiation.21,22 Preclinical studies have demonstrated that agents targeting the PI3K/AKT/mTOR pathway have little efficacy when given as monotherapy, and focus has turned to combining these agents with either chemotherapy or other targeted agents.16,23 Preclinical data have demonstrated that by combining PI3K inhibitors with either paclitaxel or gemcitabine, there is evidence of synergy with decreased tumor volume in cell lines.24 This prompted several phase I studies in which patients with advanced solid tumors were treated with combination PI3K inhibitors and paclitaxel or gemcitabine (ClinicalTrials.gov Identifier: NCT01411410, ClinicalTrials.gov Identifier: NCT01460537), although results are not yet available. Few studies have used biomarkers to select for patient inclusion, and there are currently no definitive biomarkers to predict response to these treatment combinations. It remains unclear which patients are most likely to benefit from targeting this pathway or which drug combinations are most likely to be efficacious.

Targeted therapies have greatly benefited patients with genetic alterations of EGFR and ALK, and have led to increased efforts to identify additional driver mutations and targeted therapies. We now have an increased understanding of the molecular heterogeneity of NSCLC, and have successfully identified molecular driver mutations in more than 50% of patients with NSCLC. Despite this progress, most patients with an identified mutation do not have a targeted therapy that is known to be effective. There are many promising targeted treatment strategies being evaluated in clinical trials, and ongoing molecular screening and patient enrollment in clinical trials is essential for the development of new targeted strategies.

Affiliation: Megan Baumgart, MD, is assistant professor of Medicine and Oncology at University of Rochester, NY.